Macro-regional strategies are policy frameworks for cooperation for a given transnational geographical area including several countries. They aim to address common challenges, support growth and maximise common assets. The strategies aim to support achieving social, economic and territorial cohesion through strengthened cooperation.

To put it simply: Cooperating in a macro-region means that EU Member States and third States that share a common space create a vision for their joint path in the future in form of a strategy. Countries and regions agree on joint set of thematic priorities for common actions. These thematic priorities and the implementation activities result from an inter-regional continuous dialogue, offering a political support to projects and activities that contribute to these common goals. In general, one can say that macro-regional cooperation brought a new mindset into regional cooperation moving alongside other arenas of cooperation and combining political,operational and administrative elements. 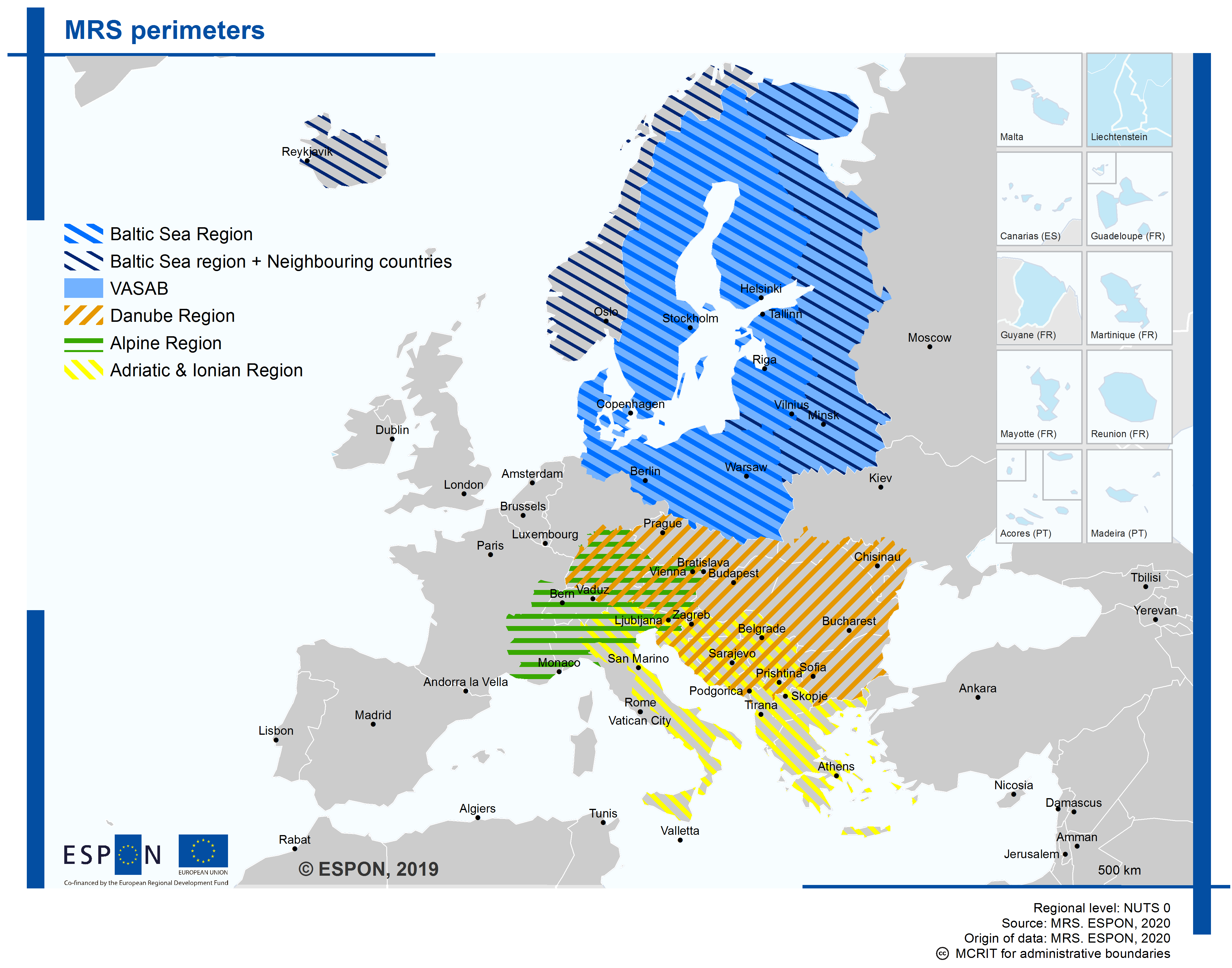 The cooperation is based on non-binding strategy documents setting out joint strategic goals, which are accompanied by so-called Action Plans. Action Plans are rolling documents that are being updated and present the focus areas and exemplary projects. Based on the principle to build on existing EU budgets, EU institutions and EU regulations, macro-regional strategies are characterized by a flexible set-up, bottom-up elements, and a sector centred governance in thematic areas. In practice this means, that each macro-region differs in their set-up, the topics addressed and the number of countries involved.

The EMTM tools shows the variety of thematic areas and implementation activities in macro-regions. While macro-regions can touch upon any policy fields of need, all the strategies address environmental policies, such as climate change and biodiversity, transport policies and connectivity as well as economic developments or institutional cooperation. Implementation activities and projects can be financed through EU funds, such as the European territorial cooperation programmes or EU sector policies such as Trans-European Network, as well as through national or regional initiatives.

Each macro-region has developed their own governance structure, leading to a complex set of macro-regional vocabulary. Yet, the general idea remains comparable: Macro-regions have an overall intergouvernemental coordination through National Coordinators and the European Commission and a thematic oriented intergouvernemental coordination level. These thematic areas (Policy Areas in the Baltic Region, Priority Areas in the Danube Region, Topics in the Adriatic and Ionian Region and Action Groups in the Alpine Region) are led by a coordinator/leader. These coordinators are responsible for the day to day coordination, whereas the decision-making within each thematic area takes place jointly by representatives of relevant ministries in the Steering Groups, and in the case of the EUSALP in Action Groups.

(Source: Sielker 2017 based on a comparative glossary published by Interact 2015)

Each macro-region builds on the cooperation of other existing cooperation frameworks and networks. In general relevant thematic stakeholders cooperate in macro-regions directly through the thematic areas, where representatives can for example become members or observers in the Steering Groups.

In the Baltic Sea Region close cooperation and coordination of macro-regional activities with VASAB and HELCOM are central. VASAB is intergovernmental multilateral co-operation of 10 countries of the Baltic Sea Region in spatial planning and development, guided by the Conference of Ministers responsible for spatial planning and development, steered by the Committee on Spatial Planning and Development of the Baltic Sea Region (CSPD/BSR) composed of representatives of respective ministries and regional authorities (Germany, Russia). The cooperation with VASAB is of particular relevance for the Horizontal Action “Spatial Planning”. Further the goals and activities of HELCOM provide important reference and input to the EUSBSR. Further cooperation partners are for example the Northern Dimension.